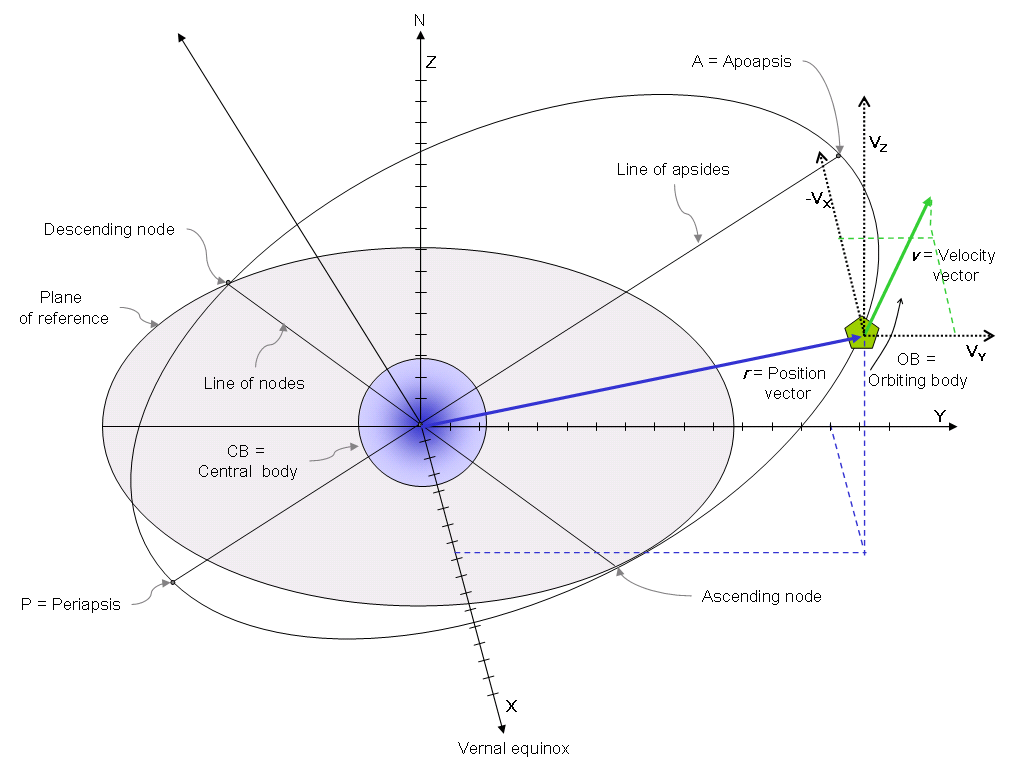 Orbital elements are a set of six parameters required to uniquely identify a specific orbit. In celestial mechanics these elements are generally considered in classical two-body systems, where a Keplerian orbit is used.

Given an inertial frame of reference and an arbitrary epoch (a specified point in time), exactly six parameters are necessary to unambiguously define an arbitrary and unperturbed orbit.

This is because the problem contains six degrees of freedom. These correspond to the three spatial dimensions which define position (x, y, z in a Cartesian coordinate system), plus the velocity in each of these dimensions. These can be described as orbital state vectors, but this is often an inconvenient way to represent an orbit, which is why Keplerian elements are commonly used instead.

Keplerian elements can be obtained from orbital state vectors (three vectors for the position and three for the velocity) by manual transformations or with computer software.

In this scheme, the orbital plane intersects a reference plane. For Earth-orbiting satellites, the reference plane is usually the Earth’s equatorial plane, and for satellites in solar orbits it is the ecliptic plane.

The intersection is called the line of nodes, as it connects the centre of mass with the ascending and descending nodes. The reference plane, together with the vernal point, establishes a reference frame.

The mean anomaly is a mathematically convenient “angle” which varies linearly with time, but which does not correspond to a real geometric angle. It can be converted into the true anomaly ν, which does represent the real geometric angle in the plane of the ellipse, between periapsis (closest approach to the central body) and the position of the orbiting object at any given time.

The angles of inclination, longitude of the ascending node, and argument of periapsis can also be described as the Euler angles defining the orientation of the orbit relative to the reference coordinate system.

Keplerian element parameters can be encoded as text in a number of formats. The most common of them is the NASA/NORAD “two-line elements” (TLE) format, originally designed for use with 80-column punched cards, but still in use because it is the most common format, and can be handled easily by all modern data storages as well. Orbital positions can be calculated from TLEs through the SGP/SGP4/SDP4/SGP8/SDP8 algorithms.